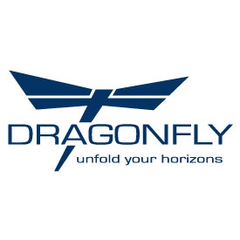 Love to travel with family on small water bodies and the coast? Water games and family picnics in the open air — your typical pastime for the weekend? Danish >trimarans from Quorning Boats shipyard, known under the brand of Dragonfly created just for you.

the Shipyard Quorning Boats was founded in 1967 Borg Kwarning. From the first days the company has designed and produced a trimaran, but the first success came with the single-hulled power boats. More decades were needed to find the right solution for the market and implement it. Only in the early 80's when the Builder has completely abandoned the single-hulled vessels, there was a brand Dragonfly.

the First models had rigid attachment of the housings together. The revolutionary concept of the Swing Wing when the hull floats attached to the main building for the Parking lot or in transit, has been used since 1989. The first model system Swing Wing was the Dragonfly 800. Residents of the rugged bays and shallow waters of the Scandinavian coast appreciated the Danish new and future Swing Wing was used on all models of the shipyard.

it is Interesting to note that the founder of the shipyard behind the wheel of his Dragonfly 800 MK I won the famous race Round Great Britain in 1985. And it was not only the victory of the Dragonfly. Trimarans under this brand have won a Micro-Multihull European championships and the Round the Island Race.

what can I say, the legendary Paul Elvstrom was the owner of one of the Dragonfly!

as If confirming a stereotype about Northern customs, Quorning Boats very slowly updates the list of models. The notorious Dragonfly 800 has been discontinued and replaced by the Dragonfly 28 in 2009 alone! So it was a successful and popular model.

a Similar fate was in the larger models of the Dragonfly 920 and 1000, the history of which ended only in 2012. To replace these "sailors" came model Dragonfly Dragonfly 32 and 35.

in addition to the Dragonfly 35 and 32, the shipyard offers fans of active recreation and smaller models: the Dragonfly 28 and Dragonfly 25. All of them are equipped with Swing Wing; all other models Dragonfly 32 are trailernya boats, and all models have two versions: touring and sport, with greater windage and configuration of steering control.

Comfortable, livable, with small draught and running without requiring a large crew, and even saving Parking space, Dragonfly enthusiasts will enjoy short journeys to their characteristics. Thus, trimarans Dragonfly is quite dynamic. They participated in sailing races and won. Today, it is not power boats for retirees. Dragonfly armed with rotating carbon-fiber masts, while the sports versions with an impressive sail and the rudder blades, located on the floats. Dragonfly created for "krugosvetki of the day", when you can easily explore waters inaccessible to larger ships. And then a simple hand movement fold the side floats, ship trimaran on the trailer and go home.

Quorning Boats all traditionally. Today, the shipyard is where it was built by the founder of the Borg Wornington 50 years ago in the village of Skærbækvej, near the town of Fredericia that Jutland. Now at the shipyard employs about 40 people, and Quorning Boats produces about 50 trimarans in the year.

the Influential British magazine Yachting Monthly has included a model of the Dragonfly 920 in its list of "100 best yacht of the century". At the same time, the Dragonfly became the only serial manufacturer of trimarans, which have been included in this list. It happened in 2006. Overall, trimarans Dragonfly three times voted "Best boat in Europe", and the model Dragonfly 1200, Dragonfly 32 was the boat of the year in the United States. 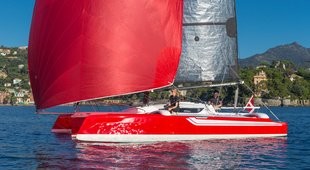 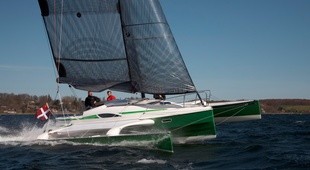 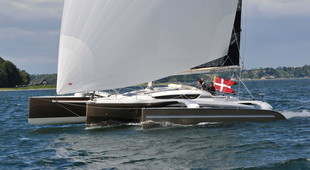 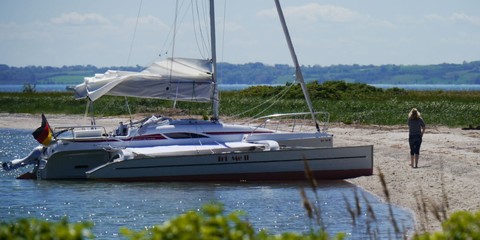 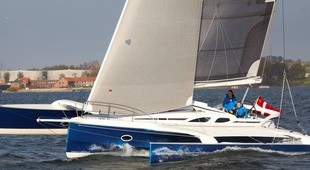 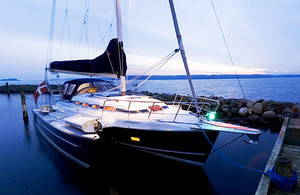