the Dutch shipyard Shipyard Holterman start to build ships half a century ago. The shipyard was laid by John. Holtermann (J. Holterman) Vries (De Vries) 1967 Wanneperveen.

During the economic crisis in the Netherlands the early 80-ies, when a bankrupt shipbuilding company of the country, Holterman is not only closed, but on the contrary, began to develop. For all time of its existence, the shipyard has built more than 500 vessels.

"We have never given a lot of publicity — say, Holterman not without pride. — We spent the money on boats that were built".

In 1991 the management of the company passed into the hands of Robbert Holtermans, son of the founder Holterman. Since then, the company has embarked on the construction of luxury yachts to order. In 2012 the yacht Holterman 60 Governor won the award "European boat of the year".

Shipyard Holterman involved in major projects in cooperation with other companies. For example, together with the Dutch Premium Yachts the shipyard has built 18 tour boats for a big client in China.

Although initially, Halterman started production in Wanneperveen, for many decades the court Holterman built on their own sites in Meppel, Netherlands. The shipyard sharpened by a full cycle of operations.

Holterman Shipyard builds >displacement yacht >expedition yachts and trawlers, as well as >a motor yacht with a steel hull. Modern models have a length of from 15 to 20 meters, the design of which can vary under customer's requests.

Holterman Shipyard offers yachts not to order, and ready to, according to the company, the buyer is not waiting 1.5 years. The selected yacht can be modified on customer request and with additional equipment.

in addition, the company offers refit, yacht restoration, upgrade and modernisation of existing vessels in accordance with the latest trends in the industry. 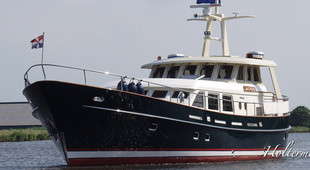 Motor yacht with a steel hull

Holtermann 60
Holtermann
18.25 m
0 offers
Add your yachts Give it the exposure it deserves