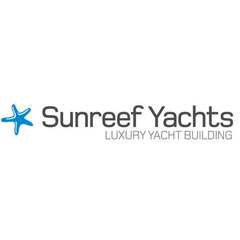 Frenchman Francis Lapp founded the Polish company Sunreef Yachts in Gdansk in 2002, when his travel company needed large, comfortable catamarans that were not available for sale.

The first flybridge catamaran 74 CHE was launched in 2003, with 70 Power JAMBO double deck in 2008, Ultimate series in 2010. The Supreme series has been produced since 2016, the classic style sailing catamarans since 2017. In 2021, the 70 Sunreef Power is slated to be released from the new line of power catamarans.

Sunreef produces 24 models in lengths of 39-213 feet: Power cruising catamarans, Sailing sailing multihulls, and Supreme series of sailing and power catamarans. Eco Catamarans are available in four models that combine the benefits of an electric motor, the comfort of a superyacht, and a holistic approach to sustainable solutions.

The company produces catamarans made of aluminum and composite materials: with a double deck, with oblique sails and with a IPS Volvo steering system. The production of masts with a height of more than 25 meters and solar panels has been mastered, adapting to any structure on board, even to a curved carbon bimini roof.

Francis Lapp was named Entrepreneur of the Year in 2013 at the boat show in Cannes, and his models have received awards from various prestigious exhibitions. In 2020, 80 Sunreef Power won two awards - Innovation in China and Best in Show at the Miami Boat Show.

The shipyard is located in Gdansk on the banks of the Martva Vistula River, providing access to rivers and the sea. It is planned to increase production capacity on a four-hectare site.

Sunreef Yachts has gained recognition in the market for its catamarans and has produced more than 140 units. Every year the design office develops at least two new models, each catamaran is made according to the individual order of the owner.

The Service Maintenance Team provides owners with advice or assistance for any technical issue. Brokerage network present in more than 25 countries.

If you are interested in the Sunreef, contact your broker or fill out the form:
Add your yachts
Give it the exposure it deserves