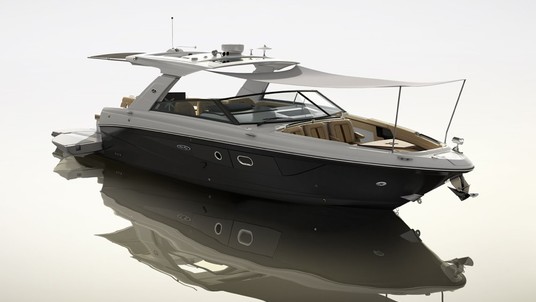 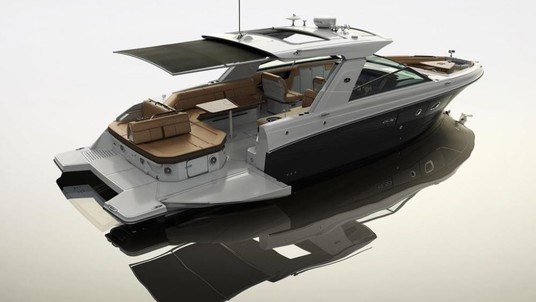 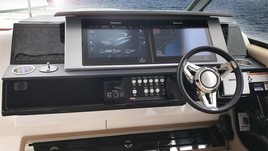 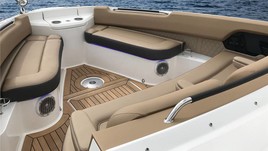 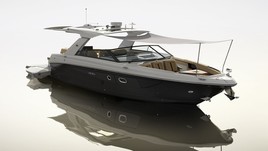 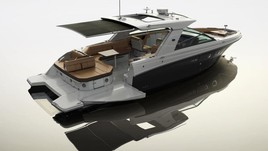 The Sea Ray SLX 400 is equipped with an electrically operated bonnet motor, LED cockpit lighting and short circuit proof wiring. The model has been produced by the shipyard of the same name since 2017, which won the Innovation Award in the same year. The vessel has received CE certification for going to sea, but no further than 200 miles from the coastline.

The boat is equipped with 12 passenger seats, one cabin and a bathroom with shower and toilet. The maximum illumination level is achieved through panoramic windows on the sides of the vessel. The boat has a sofa, armchairs, a sliding table, and there are also lockers on the cockpit deck for storing accessories and personal belongings. The boat is equipped with a stereo system with 2 speakers in the cabin and 4 speakers on deck with a remote control.

Carpet made of nylon thread is used as a floor covering on the ship. Steps to the cabin are made of teak wood with anti-slip effect. The passenger cabin is equipped with a bed, bedside table, wardrobes and shelves.

The wheelhouse has a tachometer, speedometer and oil pressure gauge, and a captain's chair with a roller, a cup holder and an adjustable backrest. All information about the status of the boat is displayed on a digital display. The boat is equipped with a ventilation system for the engine compartment, an automatic fire extinguishing system, and a bilge water pump.

The Sea Ray SLX 400 is powered by Mercruiser outboard motors up to 400 hp. The fuel tank has a capacity of 946 liters and the fresh water storage tank is 189 liters.

If you are interested in the Sea Ray SLX 400, contact your broker or fill out the form:
Add your yachts
Give it the exposure it deserves