The small resort of Sibenik in southeastern Croatia is located in the North Dalmatia region, famous for its picturesque bays and bays, rocky and pebble beaches with clear water and many historical sights that annually attract millions of tourists from around the world.

There are a large number of wide pebble beaches and rich vegetation, including on the islands. It is recommended to visit Sibenik in August, when the water warms up to maximum marks (+ 25-27 degrees Celsius). When planning to buy a yacht in Sibenik, pay attention to the options from our catalog - we have been successfully finding new owners for new and used vessels manufactured in Europe, Asia and America for several years now.

The city has a rich history, so here you can get acquainted with architecture and see from inside the historical monuments of different periods:

It is also worth visiting the local beaches, walking along Kalelarge street with its many shops and cafes, as well as buying souvenirs (for example, relatively cheap jewelry made from coral and sponges made on the islands of Krapan and Zlarin).

Sibenik has a rather convenient location on the Adriatic coast, allowing you to plan a large number of routes for traveling on a yacht. The well-equipped Marina Mandalina with 440 berths for ships up to 70 m long with a maximum draft of 5.5 m is also important , which can be reached both from Split Airport and from Zadar Air Harbor. You can also moor at the harbor port of MOJAČ with 50 berths for ships up to 15 m long and with a draft of up to 4 m. When leaving on a yacht from Sibenik, you can visit numerous towns on the coast, islands (for example, Lastovo or Hvar), and, of course the “pearl of Croatia" is the Krka National Park, 20 km from the city. If you are interested in current offers for the sale of yachts in Sibenik, use the services of one of the proven yacht brokers in Croatia, for example - B - P ODRŽAVANJE I UPRAVLJANJE DOO (Zagreb), AQUATORIA YACHTING (Pirovac) or DALMATIA YACHTING (Murter). 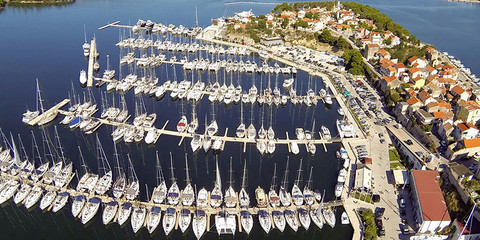