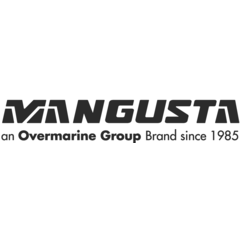 this shipyard. The founder of the future Overmarine Giuseppe Balducci, long time working under orders from different shipyards. In 1985, he decided that he could build boats and started his own company. As a future competitor was selected shipyard Technomarine and boat Cobra. But who is able to defeat the snake? So there were Mangusta. br>
Now this whole family of high-speed fiberglass sport yachts from 72 to 165 feet, equipped with water cannons or half-sunk screw Arneson Surface Drives. By the way, Technomarine subsequently ceased to exist and Overmarine took one of the most honored places in Viareggio, the traditional centre of Italian shipbuilding. br>
World fame came to the company primarily due to its original take on the concept of open-class and negating at all. "We offered the market a sports boat with the same amount of space and level of comfort that flybridge boats of a similar size, but Mangusta is primarily the speed," the company says. br>
Over the years of its activity the company has built more than 300 boats, has opened offices in France and USA and developed a dealer network around the world. For a long time, the shipyard built only of high-speed planing "mongoose" (not including military ships). One of the latest developments in this series — Mangusta 215, but in an aluminum casing. br>
Simultaneously, Overmarine has decided to expand its product range and launched production of a line of three-deck semi-displacement Explorer Oceano (line starts with yachts up to 42 m), and also opened a specialized unit that will build custom yachts up to 70 m on the basis of our own projects or according to customer's drawings.

If you are interested in the Overmarine, contact your broker or fill out the form:
Add your yachts
Give it the exposure it deserves