0 yachts for rent in Vieste

Vieste is a famous seaside resort in the Italian region of Apulia. In Vieste, next to the beaches that have been awarded the Blue Flag for the purity of the surrounding waters, lies the Gargano mountain range, which offers excellent views of the coast. Due to water and wind erosion, the coastal cliffs are dotted with grottoes and arches. Since many of the rocks are very steep, you can only look at the most beautiful views, inaccessible from land, only on a yacht.

You can rent a yacht in Vieste and explore the coastal grottoes near Tremiti Island and find the best underwater spot. If it gets very hot, you should go for a walk in the Gargano Nature Reserve. Yacht charter in Vieste allows you to have fun in the resorts of Italy, get acquainted with the local culture and cuisine, visit the beaches and dive from the yacht. So you will make your vacation unforgettable, full of positive impressions and leave many impressive photos in your photo collection.

Vieste was founded in the 7th century BC. Greek conquerors. This place (at the very end of the Gargano Peninsula, deeply protruding into the Adriatic Sea) was chosen by the Roman Empire, after the fall of Rome, Byzantium ruled the peninsula, the Arabs owned it for a short time, the Normans owned it for a while, and then the Venetians. And finally, in the 19th century the city was incorporated into Italy.

Sightseeing from the sea is the best way to get to know the city, see bays that are not accessible to anyone and visit remote islands. To take advantage of the possibility of renting a yacht in Vieste , type in the criteria you need in the search - the system will select the most suitable options for you.

Yacht charter in Vieste is your opportunity to organize the perfect holiday in Italy, with an eco-friendly sea, mountain ranges and sandy beaches. To choose options, use the capabilities of our site - the system will select the suitable offers for you, based on your preferences.

Vieste is a famous seaside resort in the Italian region of Puglia. In Vieste, next to the beaches awarded the Blue Flag Award for the cleanliness of the surrounding waters, there is the Gargano massif, which offers excellent views of the coast. Thanks to water-wind erosion, coastal cliffs are dotted with grottoes and arches. Since many rocks are very steep, you can only look at the most beautiful views from the land and see them only by renting a yacht in Vieste and embarking on a sea voyage.

Time in the narrow streets of Vieste seemed to slow down. The old town of Vieste is considered one of the most beautiful historical centers in Puglia. You can try seafood in numerous restaurants and cafes. In the meantime, you should pay attention to local attractions.

“Pizza” is a rock that rises 25 meters above Spiaggia del Castello - the castle coast . According to legend, the Pizzomunno stone literally grew from the depths of the sea itself. In Vieste, there lived a young fisherman Pizzomunno, who fell in love with a girl with beautiful hair. When he was at sea, he was seduced by sirens in every possible way, but the young fisherman was as solid as stone. Each time he returned from the sea, he hugged with his lover and they walked under the moon. But the sirens decided to destroy the happiness of the fisherman - one night they dragged Kristalda by force from the fisherman’s hands into the depths of the sea. No matter how Pizzomunno tried to snatch his beloved from the hands of sirens, all his attempts were in vain. From grief, the fisherman turned into a stone, which stands on the beach to this day. This legend lives among the inhabitants of Vieste - the city of fishermen.

The Museum-Civico Museum has historical collections, which showcases exhibits from the pre-Roman period of the city . The Chiesa di San Francesco church (15th century) is located at the very end of the cape, on which the historical center of the city is located. The historical center is washed by the sea from 3 sides. The Cathedral in the name of the Assumption of the Blessed Virgin Mary combines several styles and is equipped with a bell tower. Inside the cathedral you should like the baroque ceiling with paintings. Also in the historical center stands out the building of the castle Castello Svevo Aragonese of bastion form (14th century), in which the military settled. From the castle you can clearly see the whole city.

Until recently, the local economy was based on fishing and farming. But with the advent of the tourist boom , hotels and campsites arose in Viesta one after another, giving a considerable profit to the economy.

Punta Lunga Beach is a significant place with its own exotic. Surfers from all over the coast gather here. The free, free Chianca beach has sun loungers and tourist umbrellas, which can be rented in the tourist village nearby. Molinella beach is ideal for visiting with children, you can choose from a free zone or four paid.

You can rent a yacht in Vieste and explore the coastal grottoes near the island of Tremiti, find the best place for underwater photography. If it gets very hot, you should go for a walk in the Gargano Nature Reserve. Yacht charter in Vieste will allow you to have fun at the resorts of Italy, get acquainted with the local culture and cuisine, visit the beaches and dive into the water from the side of the yacht. So you will make your vacation unforgettable, full of positive impressions and leave a lot of impressive photos in your photo collection. Have a great trip! 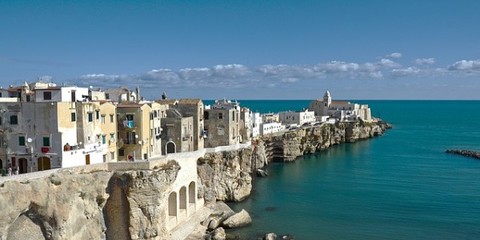