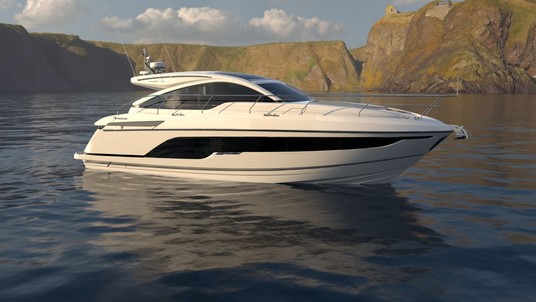 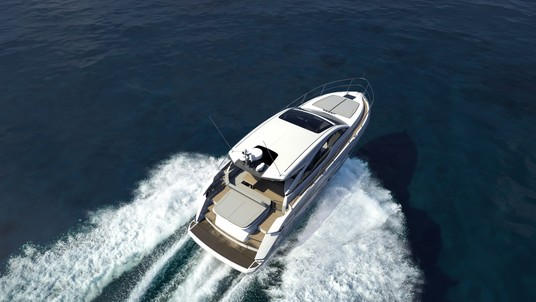 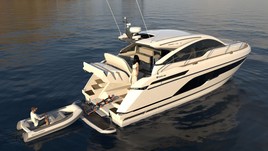 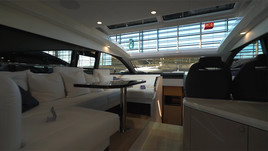 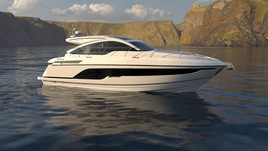 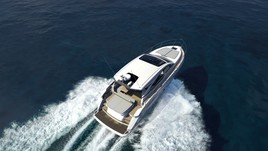 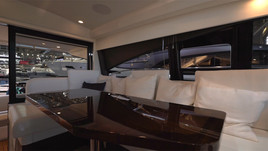 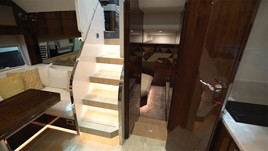 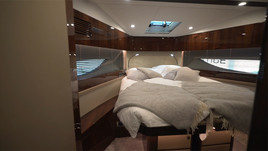 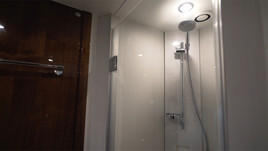 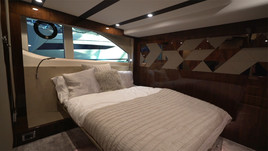 The Fairline Targa 45 GT closed cruise boat with hardtop has been in production since 2019. Her premiere took place in 2020 in Dusseldorf, where she was presented by the shipyard as the best model of a yacht. The Fairline Targa 45 GT is an improved version of the Targa 43 model. The Targa 45 GT gliding vessel with a fiberglass hull is considered the smallest in the lineup, but its exterior is not much different from other vessels created by Alberto Mancini. The main feature is the tender garage, which allows you to place the Williams Minijet 280.

In the cabin with panoramic glazing, on the left there is a U-shaped sofa and a folding table, on the right there is a double control post, trimmed with plastic and metal. Before fasting, the Garmin 12 multifunction display and the Volvo Penta 7 diagnostic display are located on the dashboard.

On the lower deck there were cabins with high ceilings and a flat floor without steps, as on large ships. In the main version, the VIP cabin with single beds and mirrors is on the bow, and the master cabin is in the middle. They can be interchanged and add another guest cabin. But the galley in the second version rises, and the area on the upper deck decreases. Any of the layouts involves only two bathrooms with showers.

The yacht model is distinguished by its good running characteristics, thanks to its robust hull and the possibility of installing powerful two engines. Two Volvo Penta IPS 600 D6-440 will allow speeds up to 32 knots, with two Volvo Penta IPS 650 D6-480, the ship can accelerate to 33 knots. The yacht is certified (CE) B and is designed to go to sea.

If you are interested in the Fairline Targa 45 GT, contact your broker or fill out the form:
Add your yachts
Give it the exposure it deserves