0 yachts for rent in Korčula

If you're looking for a island paradise, you've come to the right place. The beaches on Korcula are great and there are plenty to choose from. The islet Prozd is located near Vela Luka and its beaches are often called “the best beach in Croatia”, including in the foreign press. To get to Proizd you will need to take a boat ride from Vela Luka. There are a few small beaches that are not actually beaches, but rather stone slabs diving into the amazingly clear sea.

If you want to experience an unforgettable vacation in one of the most beautiful places in Europe - the best way to do this is by taking a yacht charter in Korcula. This will allow you not only to fully enjoy the local climate, but also to visit the best places in the region.

In an era of excessive tourism, the island of Korcula is an absolute gem. Living in the shade for many years of glamorous neighbors such as Dubrovnik and Hvar, Korcula quietly declares itself as a place of quality and luxury, which is gradually separated from the rest. Korcula is the birthplace of Marco Polo. I wonder what inspired him to leave such a paradise? Perhaps a magnificent view of the Korcula Canal and the Peljesac Peninsula beyond.

Korcula is famous for its white wines. The most common of these is Posip, arguably the most popular white Dalmatian. But there is also the Grc, which grows only on the sandy soils of Lumbarda. You can taste wine all over the island , but nothing beats visiting a winemaker.

The view from the old city is divine. In the distance is Orebić on the Peljesac peninsula and the mainland beyond, and between them are some idyllic emerald jewelry of a small island awaiting your visit. Former stone quarry, one of the best beach bars on the Adriatic, even a lighthouse with its own butler - that's what awaits. The alleged home of the most famous traveler in the world is the obvious highlight of a walking tour of the old city. And although the old city may be small, do not be fooled by its size. Any local guide will fascinate you for hours, because each stone has so much history and tradition.

Every Thursday night in the old town during the season you can see the fabulous Morex sword dancers performing their incredible dances. Sword dancing is a proud tradition on the island. The more time you spend on the island, the more you realize its heritage. One of the greatest archaeological discoveries of Croatia is located near Vela Luka - a cave of 30,000 years ago called Vela Spila , in which there is evidence of early human habitation.

If you are looking for a paradise island beach, then you have come to the right place. The beaches on Korcula are magnificent and there are plenty to choose from. The islet of Produk is located near Vela Luka, and its beaches are often called the “best beach in Croatia”, including in the foreign press. To get to Proizd, you will need to get a boat from Vela Luka. There are several small beaches that are actually not beaches, but rather stone slabs diving into the wonderfully clear sea. In addition, there is a rather shallow Batalo Bay, in which young children can play without much danger. The island also has vegetation for those who do not want to spend a day in the sun. There is one restaurant on the island. Vaja is not a beach that is easily accessible. It is located near the village of Racisce, about one kilometer from the center of the village and about 15 km from the town of Korcula, and you can drive pretty close to the beach on a dirt road. After you park, the adventure begins. The descent to the beach is steep, but not very long. The sea there is completely clean , there are usually not many people on the beach, pebbles are wonderful, there is even a shadow where you can hide from the sun. There are no bars or restaurants

A little closer to Korcula, close to the main road that leads to Racisce along the northern coast, there is Knezha Bay, and below is the beautiful Knezha Beach. It is very easy to get to, since it is a couple of dozen steps from the road, during the main season it is busy. There is no natural shade on the beach itself, so if you plan to stay longer, make sure you have enough sunscreen. There are two islands in the bay, so good swimmers may want to explore them and find solitude there. You can see several boats moored in the bay.

Vrbovitsa is a large bay located a few kilometers west of the city of Korcula. There are several small and large beaches that you can find in this bay. However, the beaches in the bay are actually not too crowded, even in the highest season, and there are sections of the bay where you can go to have a little privacy and time if you want (especially the cape north of the bay). In the bay, you can also expect several boats and sailboats, especially in the afternoon. The bay is very close to the road, so you don’t need to worry about access to the beaches in Vrbovice, and, of course, you are very close to several bars, restaurants and shops in the Srnovská bath, so you don’t have to worry about bring something with you.

In Uvala Luka, this is not one beach, but also many beaches, wonderful rocky places and a lot of beach holidays. It is a bay southeast of the old town of Korcula. But the beaches are really good , you have pebbles, as well as some rocky parts to enjoy, of course, bars and restaurants.

Badia is the place you should visit if you are spending your holidays on Korcula. A short and very affordable boat trip and you will find yourself on a beautiful island with a monastery, some ancient ruins, a restaurant, a pedestrian path around the island and 4 kilometers of coastline, just inviting you to put your towel and swim. There are 2 main beaches, one between the monastery and the restaurant, and the other on the northeast side of the island, but there are many other small sections of beautiful pebbles around the island.

Great stay for the whole family

Vela Przhina is perhaps the most famous of the beaches on Korcula. This is a rather long sandy beach near Lumbarda, on the easternmost tip of the island, facing south. It is easily accessible by car (although you will have to pay for parking there), and you can also walk to Lumbarda, and this is mostly a children's paradise. This sandy sea is really shallow and therefore quite warm, it has a protective net, why parents love to bring their children here. Since it is popular, you can find a lot of things that a beach vacation needs, so there are two bars, you can rent umbrellas and sun loungers, there is a playground for beach volleyball. You can even get a massage there if the kids get on your nerves. If you want to avoid the crowds, you can just take a little walk to the west and find wonderful places on the rocks, but there is no natural shadow.

Bilin Pity is a beach located opposite Vela Przhina, a 10-minute walk between them, facing north. It is a paradise for children and their parents. There are also restaurants there, and in high season it is also crowded, but if you decide to take a walk east or west from the center, you will find some of the most beautiful rocky places of solitude on the whole island. There you can put your things in the shade, swim in a completely clear sea, the only drawback is that entering the sea and going back to these rocks can be difficult for those who are used to a sandy or pebble beach, but this is the price for an ideal setting .

The closest neighbor of Pupnacka Luka, Bachva, is another of several bays on the southern side of the island of Korcula, facing the island of Lastovo. It is also a pebble beach, smaller than the beach of Pupnatska Luka, and less crowded, but otherwise very similar to it - and there is a restaurant there. The sea in Bachva is absolutely clear and turquoise , pebbles are perfect for walking, it is also difficult to find a shadow in Bachva.

Pupnatska Luka Beach is another favorite on Korcula. On the south side of the island, at the bottom of a deep bay, almost always sheltered from the winds, this sandy beach is a very popular place for day trips. It is 15 km away from Korcula, near the village of Pupnat, and you can drive along a dirt road in the immediate vicinity of the beach itself. If you do not have a car, you can take a bus to Pupnat. There is not much natural shade on the pebbles of the beach, so you should bring your umbrella or rent it on the beach. There are two bars / restaurants on the beach.

There are two main points of entry - Vela Luka, which is served by a daily catamaran from Split and Hvar, as well as daily car ferries.

If from Dubrovnik, catamaran Krilo, who also stops at Mljet, Hvar and Milne on Brač. Near the town of Korcula there is a regular car ferry to Domans, as well as direct hourly delivery of passengers directly to the city. Ferry service takes 15 minutes. 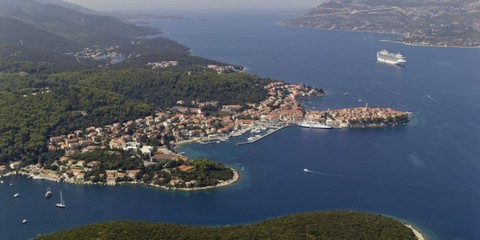