0 yachts for rent in Villefranche-sur-Mer

If you want to experience an unforgettable vacation in one of the most beautiful places in Europe - the best way to do this is by taking a yacht rental in Villefranche-sur-Mer. This will allow you not only to fully enjoy the local climate, but also to visit the best places in the region.

In the heart of the French Riviera is Villefranche-sur-Mer, a charming fishing village on a hillside, hidden between Monaco and Nice. This coastal region is known for its sandy beaches, cafes with terraces, red tiled roofs, narrow cobbled streets and quaint city squares. Despite the medieval atmosphere, it is quite cosmopolitan, with gourmet restaurants and the famous French Institute.

Villefranche Bay has been named one of the five most beautiful bays in the world , making it an ideal place for yacht charter. Guests of the charter yacht will enjoy the sandy beach, craft boutiques, historic churches and breathtaking views.

Villefranche-sur-Mer is without a doubt one of the most picturesque cities on the Cote d'Azur . Regardless of whether you are approaching Villefranche by land or by sea, it resembles the most amazing oil painting, combining all the bright colors that you can imagine. But this is not a still life; Villefranche is a very vibrant town. The constant diversity of his color mixing made Villefranche a city of painters and artists, and not Saint-Tropez.

From the moment you arrive by sea, by train or by car, Villefranche offers an impressive panorama of the French Riviera, and its climate is temperate all year round. The surrounding gardens and vegetation are lush and plentiful, strewn with wild lilac and yellow flowers, which contrasts with the rocks further to Ezu and Monaco.

Villefranche-sur-Mer is a dazzling city with its 16th-century port and citadel, and the 18th-century Baroque St. Michel church, at the foot of a huge amphitheater and with a magnificent promenade, has preserved many traces of its historical origin.

As a maritime city located in a very privileged location and in the immediate vicinity of Nice and Monaco, Villefranche has become one of the main yacht parking spots on the Cote d'Azur, not only with luxury charter yachts, but also with many cruise ships. However, deep down, Villefranche is still a fishing port with a flotilla of small boats that leave the port early in the morning, and the atmosphere in the city is very similar to a small sailors village. Fishing fits into Villefranche's culture. Needless to say, fish is one of the main dishes in many menus of local restaurants.

The markets in Villefranche are crowded with local produce, where many restaurant chefs come to find "the best of the best." Much easier than heading to one of the wholesale markets on the other side of Nice. The main local sales markets in Villefranche are located in Place de la Octroie (from 8:00 to 13:00 on Wednesdays and Saturdays) or in Place Charles II d'Anjou (fish market from 7:30 to noon on Friday). Come early as the best know very fast!

The choice of restaurants in Villefranche is fascinating, and if you like good fish and shellfish, choosing the wrong place is quite difficult! Les Garçons Restaurant (18 rue de Poilu) has great snacks and monkfish. Le Mayssa Beach (9th place Wilson) is an excellent choice for those who really want to be near the sea during a meal (almost in the water). The legendary La Mère Germaine (9 Quai Courbet) offers one of the best Plâteau de Fruits de Mer on this stretch of coast. Villefranche-sur-Mer is the place you just need to visit when chartering a yacht in the French Riviera .

This baroque church, located in the center of the old city, was built in the 1750s on the site of a more modest 14th-century church. It contains various works of art, including a large painting of St. Michael and the sculpture "Christ on the Galleys" of the 18th century . The organ, built by the Grinda brothers in 1790, is one of the oldest organs in the region that still operates.

Built in the 17th century for the galleys of the Duke of Savoy, it is now a marina from around the world. There is also a branch of the Villefranche Oceanographic Observatory, part of the Pierre-Marie Curie University of Paris and the French National Center for Scientific Research.

Founded in 1557, the area houses the town hall, conference center, museums and an open-air theater.

To discuss yacht rental in Villefranche-sur-Mer and the French Riviera (Cote d'Azur), please contact a broker on our website. 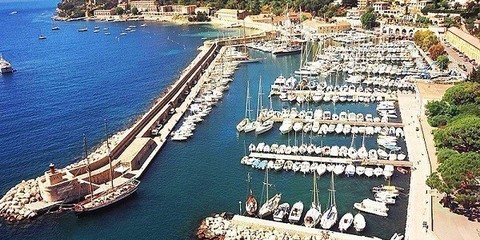