0 yachts for rent in Benalmádena

Benalmadena is warm and sunny almost all year round. Local beaches stretch for 9 kilometers, the sand here is gray and warms up very well in the sun. It is very pleasant to rest on such sand, basking in the southern sun. In Benalmadena, it is equally pleasant to relax for both young people and families with children.

A walk on the water will be a great way to spend time interesting and useful for newlyweds, couples in love or just a group of friends who have gathered to celebrate the holiday. You can rest assured that yacht charter in Benalmadena is available to everyone. A trip on a rented boat will allow you to combine the pleasure of a boat trip with contemplation of the natural beauty of the coast. The yachts are equipped with everything you need, so you are provided not only with a comfortable, but also a safe rest.

Benalmadena is one of the best resorts in Spain with a rich history. The construction of the port of Benalmadena began in 1972, when the measures of the city of Enrique Bolin introduced a proposal for the construction of a pier for wealthy tourists traveling through the Mediterranean Sea. The unusual style of the port combines Indian, Arab, Andalusian destinations. The berth has water sports and fishing clubs. The city is divided into 3 parts: the coastal area, Benalmadena Pueblo closer to the mountains and Arroyo de la Miel (a former fishing village).

You can use our website to rent a yacht in Benalmadena to embark on the journey of your dreams. See the best yacht charter deals in Benalmadena for a great time on the Mediterranean coast. Benalmadena Marina is located in the heart of the coast of Spain, in the Costa del Sol region. The nearby resorts of Torremolinos and Fuengirola.

Benalmadena is known for its sandy gray sandy beaches, which attract tourists from all over the world to sunbathe. You can relax in Benalmadena both alone and with family (friends). It should be noted that the beaches of Benalmadena have been awarded the Blue Flag , which is an indicator of high water quality.

The historical center of Benalmadena - Pueblo, attracts tourists and travelers from around the world with its rural flavor.

Benalmadena attractions include the amusement park and the Sea Life Center with Europe's largest collection of sharks . In the Center you can get acquainted with the inhabitants of the deep sea contained in aquariums. You can also visit the dolphinarium Selwo Marina - the only marine park in Andalusia.

The main attraction of Benalmadena is the 33-meter Buddhist Stupa of enlightenment. It symbolizes peace, enlightenment and harmony and serves as a place for meditation. Adventure lovers can head to the sports port and Benalmadena Yacht Club. An international fishing tournament is held annually in Benalmadena .

On the promenade of Benalmadena Costa is the Bill-Bill Palace, built in the early 20th century.

A cable car stretches from the coast to the mountains , rising to a height of more than 700 meters above sea level. From the top of the mountain offers wonderful views of the coast and Gibraltar.

Benalmadena has the Tivoli World theme park , which has many exhibitions and restaurants where you will be happy to be treated to sangria. If you're a fan of thrilling entertainment, you'll love the Torrequebrada Casino in Benalmadena.

Tourists in Benalmadena invariably encounter Andalusian hospitality and the influence of the traditions of other cultures. The resort has very reasonable prices , which should appeal to thrifty tourists.

In Benalmadena you will find everything you need for a fruitful holiday: beautiful sandy beaches, medieval buildings and museums.

Spanish culinary traditions are well preserved here - in the restaurants of Benalmadena you can order Andalusian dishes, as well as taste local wines. In the city you will find many cozy taverns and restaurants. Here you can taste the famous Spanish gazpacho soup, as well as fish cooked over an open fire . The most popular local wine is called Rioja, and for wine aficionados in Benalmadena wine tours are held with visits to local vineyards.

Among the tourists are very popular walks on the mountain slopes, as well as the cable car. At the terminal station of the cableway there is a park equipped with viewing platforms and landscaped places for recreation.

You can rent a yacht in Benalmadena to watch the beauty of the Mediterranean Sea. If you love the sea, then yacht charter in Benalmadena is the best option for you. You will have a fantastic time visiting the many ports of the Costa del Sol. We hope that you will spend unforgettable time relaxing in Benmalmadena on a rented yacht. We wish you a good vacation! 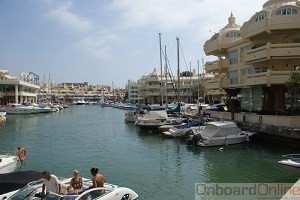