Santa Cruz de Tenerife is a resort in the north of Tenerife, surrounded by steep cliffs of the Anaga mountains. The city was founded in the 15th century by the Spaniards on the site of their landing, a cross was erected here, which became the center of the growth of the main city of the Canary Islands. Santa Cruz de Tenerife has everything for relaxation: gorgeous beaches, wide squares, narrow streets of the old center with its attractions and green landscaped parks.

You have the opportunity to rent a yacht in Santa Cruz de Tenerife for any period, from days to several weeks. When traveling on a rented yacht, you can enjoy the views of the sea, fish, swim and sunbathe. If you do not know how to sail a yacht well enough, you should undergo training at a local yachting school, upon completion of the training you will be given a document giving you the right to sail. On a yacht, you will significantly broaden your horizons and get vivid unforgettable impressions.

A few decades ago, yachting was considered an exclusive form of relaxation, inaccessible to people with average incomes. But, in fact, the situation is simpler - for the organization of sea trips it is not necessary to purchase a ship, for today you can simply rent a yacht.

Santa Cruz de Tenerife is a resort in the north of Tenerife, surrounded by steep cliffs of the Anaga Mountains. The city was founded in the 15th century by the Spaniards at the place of their landing - a cross was installed here, which became the center of growth of the main city of the Canary Islands. After that, the island was repeatedly claimed by the British and other Europeans, but the city was never taken by force.

Santa Cruz de Tenerife has everything for relaxation - gorgeous beaches, wide squares, narrow streets of the old center with its sights and green equipped parks.

All the sights of the city can be bypassed in one day. Most of them are concentrated in the Plaza de Spain. Nearby is the Church of St. Francis (17th century), it is also worth looking at the Church of Iglesia de Nuestra Senora de la Concepcion (16th century). Calle Castillo - the main street of the city, is the center of the tourist life of the city and is dotted with shops, restaurants and cafes. The Museum of Archeology and Anthropology has an exhibition that displays weapons and household items of the Guanches - the indigenous inhabitants of the archipelago. In the Military Museum you can look at an exhibition of weapons from different eras, and you can get knowledge about the nature and wildlife of the island in the Museum of Nature. Museum of science and space can be visited with children up to 16 years - here a lot of informative and interesting has been collected for them, there is even a planetarium. Palmetum is a botanical garden in which only palm trees grow, containing more than 400 species of these tropical plants and divided into several zones according to belonging to a particular corner of the world.

Symbols of the city are the opera building, the skyscrapers of Torres de Santa Cruz and the largest city park in size - Garcia Sanabria (more than 60 thousand square meters).

On the central city market of the city you can buy fresh vegetables and other products.

Every year , the largest carnival in Europe is held in Santa Cruz de Tenerife - not only residents of neighboring islands come here, but also tourists from around the world to take part in the colorful event. All carnival events are free, tourists and locals walk around surrounded by artists and singers.

To the east of Santa Cruz de Tenerife is the village of San Andres with fine white sand, and there are diving clubs nearby. The underwater kingdom is overgrown with corals, there is a very interesting underwater world.

In Santa Cruz de Tenerife, you can visit the Teide Volcano and other attractions scattered around the area.

If you are interested in shopping, you should go to El Corte Ingles - the largest shopping center with parking, entertainment, grocery, souvenir and other shops. In this center you will find affordable Spanish brands: Adolfo Domingues, Carolina Hererra and others, as well as luxury items from well-known companies like Dolce & Gabbana and Armani. It should be remembered that in Santa Cruz de Tenerife discounts of up to 70% are valid from January to February and from July to August, and electronics are much cheaper than in Russia.

There are 2 marinas in Santa Cruz de Tenerife - del Atlantico and Marina of Tenerife, as well as a fishing marina, which is crowded at any time. In Tenerife, the season lasts all year, and rains are rare. There are all conditions for yachting - proven routes have been developed and equipped moorings. You can rent a yacht of any type in Santa Cruz de Tenerife , with or without a skipper.

You have the opportunity to rent a yacht in Santa Cruz de Tenerife for any period - from a day to several weeks. When traveling on a rented yacht, you can enjoy sea views, fish, swim and sunbathe. If you do not know how to steer a yacht well enough, you should study at a local yachting school - upon completion of training you will be presented with a document authorizing you to operate the yacht. When you charter a yacht in Santa Cruz de Tenerife , you will significantly broaden your horizons and get a vivid unforgettable experience. 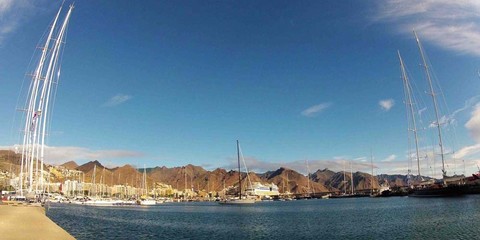