Yachting in Italy: the sights of the island of Ischia

The island of Ischia in the Tyrrhenian Sea attracts tourists with a successful combination of natural and historical attractions. Despite the fact that it has a small area (only 46 square kilometers), a large number of museums, parks, beaches, spas and hotels are concentrated here. The island is of volcanic origin, and on its territory there are 3 volcanoes, of which the largest is Epomeo, which has a height of 788 m. Volcanoes are the best natural attraction of these places, and you should not be afraid of them, because the last time there were eruptions in the 14th century.

Ischia is also famous for its thermal springs, of which there are more than a hundred. The springs have medicinal properties (it is not for nothing that the island of Ischia is called the "Italian health resort"), and many of them come to the surface right on the territory of the hotels. Thanks to the good ecology and favorable climate, the treatment here is very effective. There are also thermal parks on the island, where guests can use swimming pools with different water temperatures. There is a lot of greenery in the parks - these are pines, palms and exotic flowers. 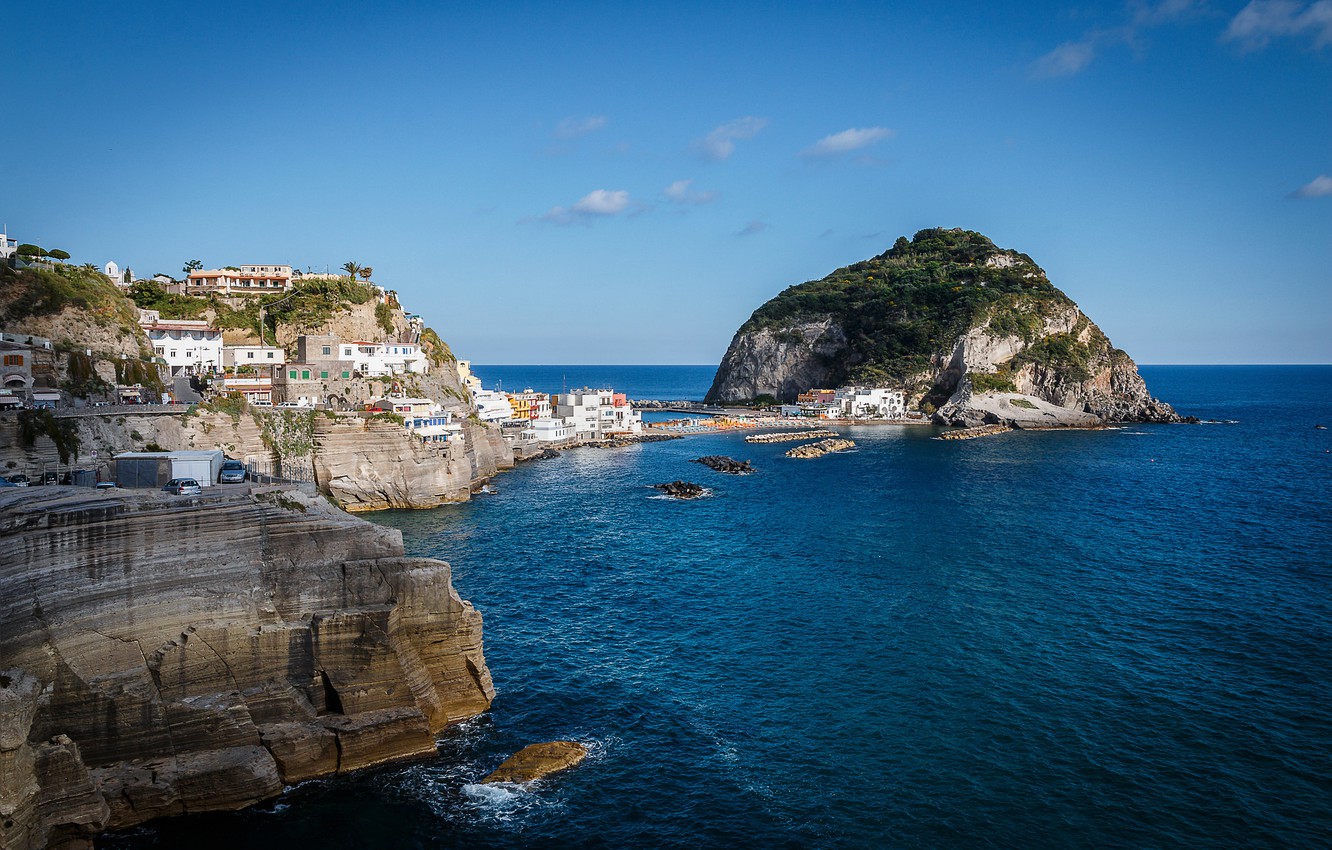 Every year, thousands of people come to the island of Ischia to treat various diseases (including: endocrine, vascular and neurological) and recover from injuries. At the same time, many, to get here, rent a yacht in Italy, which allows not only to take advantage of the opportunity to recover, but also to get acquainted with the natural beauties of this region.

It is noteworthy that Ischia became a resort area back in the days of Ancient Rome, when the Romans began to use the beneficial properties of thermal waters.

Here we provide descriptions of popular and interesting places on the island, that are worth visiting in the first place. 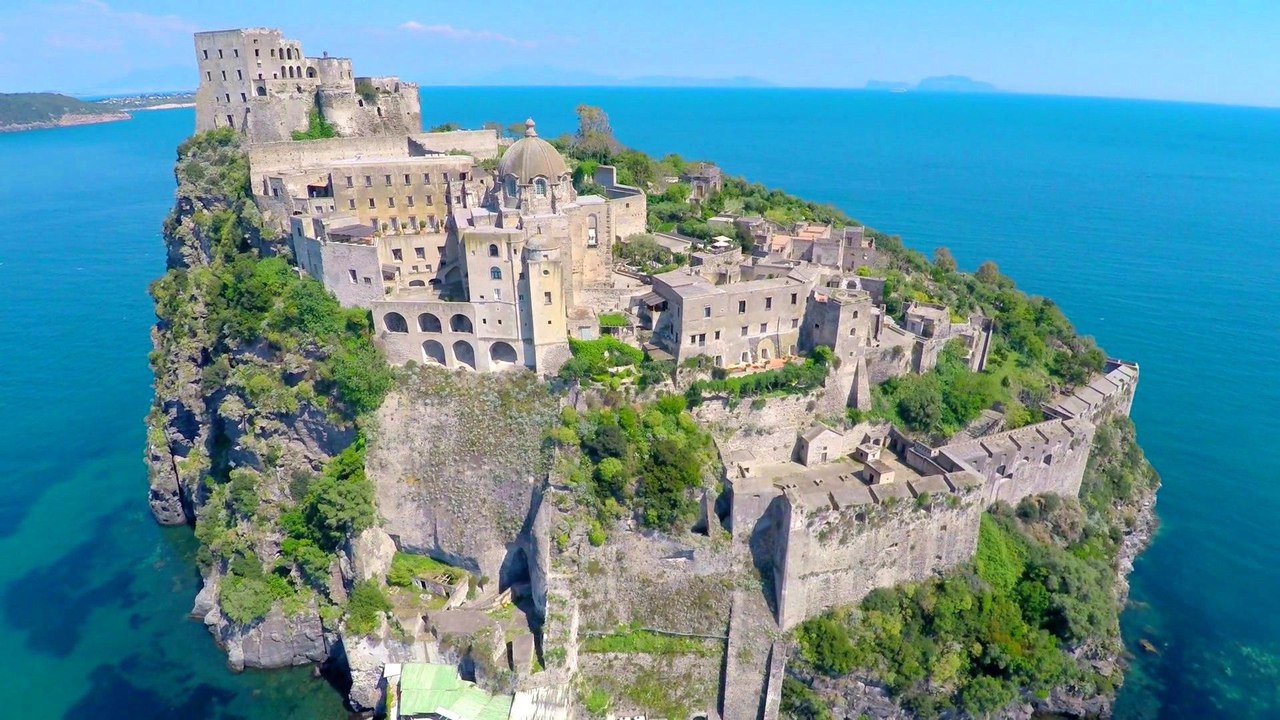 The Aragonese Castle is the key attraction of the island of Ischia and its symbol. The castle is located on a small island, to which a dam leads. Since its founding, the most influential and wealthy people, have lived in it, and today the castle is a popular location for filming films and TV series.

Built in ancient times, the Aragonese castle impresses with its size - its area exceeds 500 sq.m. On the territory of the castle, the Church of the Immaculate Conception is well preserved (used as an exhibition hall); the Cathedral of the Assumption with frescoes of the 11-12 centuries has also survived to this day. A specific attraction of the castle is the Torture Museum.

The height of the Aragonese castle exceeds one hundred meters, and a wonderful view of the surroundings opens from the fortress. You can get to the top on a convenient lift (you can also use the tunnel dug in the tuff rocks). 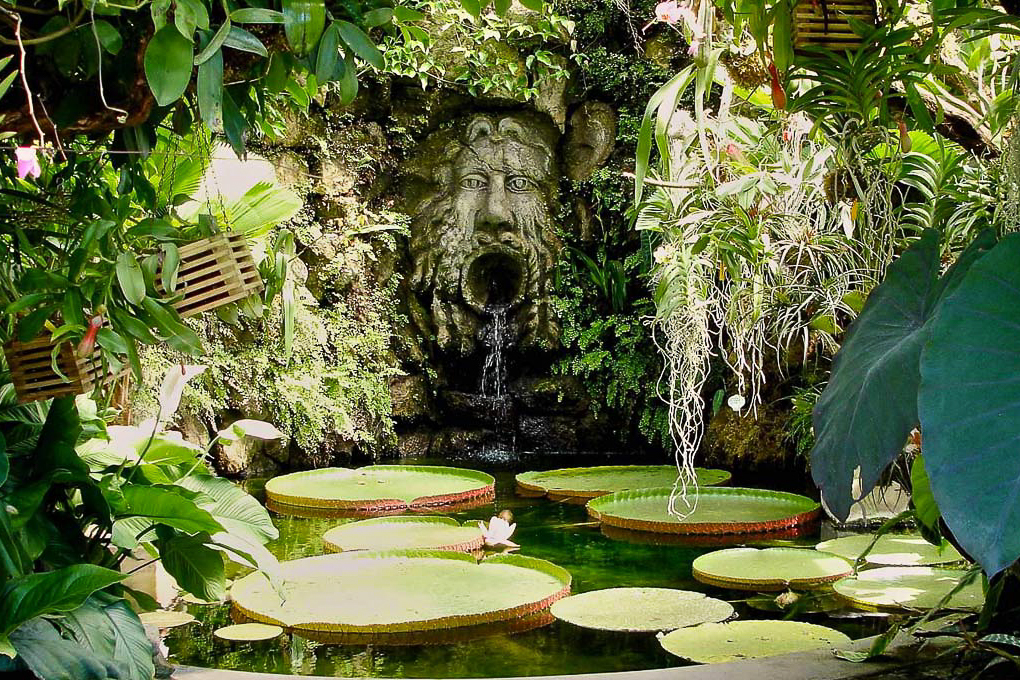 More than 3 thousand plant species grow in the Botanical Garden, including succulents (they have special tissues for water reserves and are able to do without watering for a long time) and rare representatives of the flora of different countries brought to the island in the last century.

The Archaeological Museum can be advised for history buffs, here are collected amphorae, bronze and obsidian items, painted dishes.

The museum is housed in an 18th century building surrounded by a picturesque garden.

All exhibits are distributed in several halls, with special attention paid to the Epomeo volcano, because over the centuries it has made significant changes in the way of life of the inhabitants of the island.

Cathedral of the Assumption of Our Lady (Cattedrale dell`Assunta) 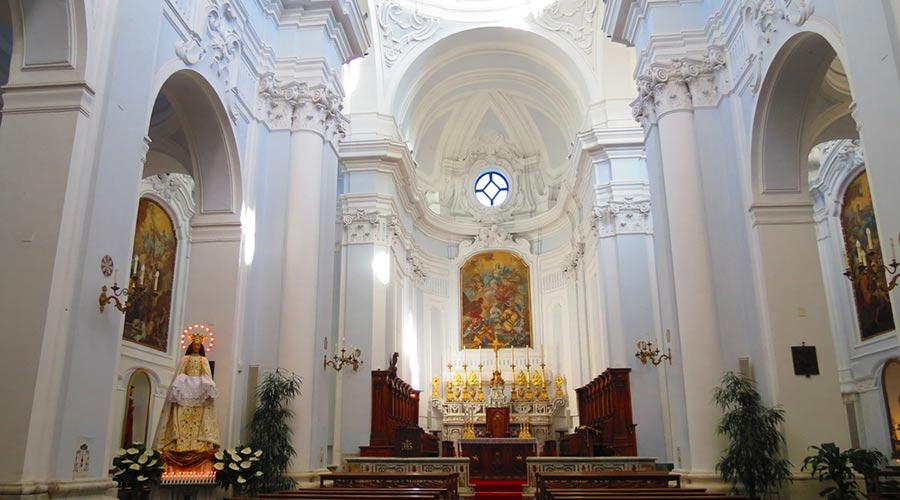 The Cathedral of the Assumption of Our Lady in the commune of Ischia, the main temple of the island, was destroyed three times by earthquakes and robberies.

But each time it was restored in an updated form.

In the 14th century cathedral, parts of the chapel, decorated with frescoes with images of saints, have been preserved. 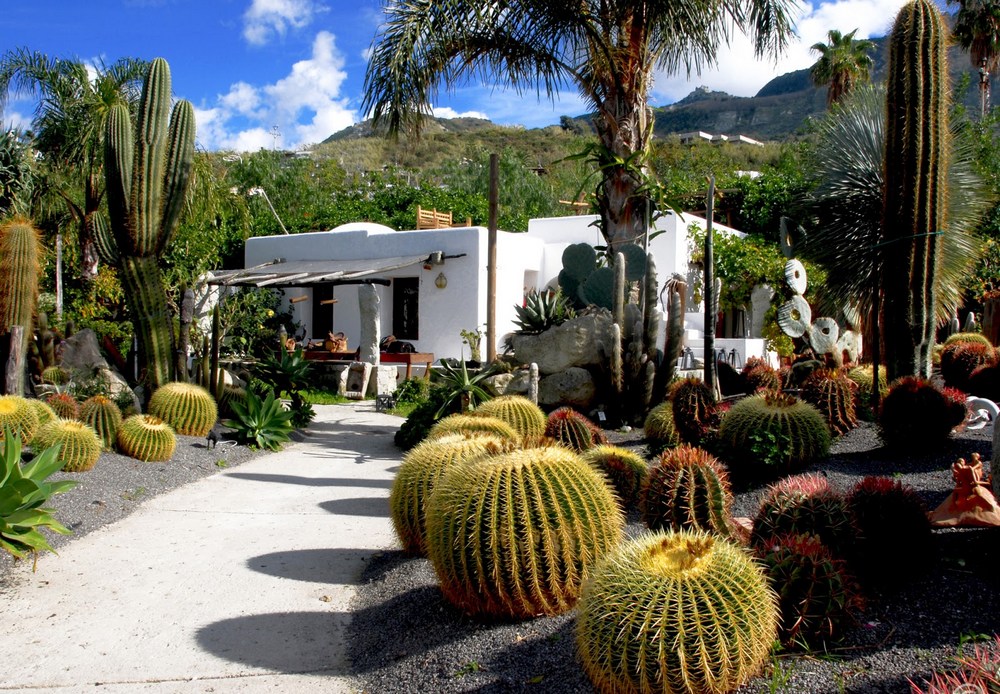 Here you can have a good time walking among exotic plants accompanied by peacocks.

The garden has an area of 6 thousand sq. M. a unique collection of cacti and succulents has been collected.

It also houses an art gallery, that houses works by local artists. 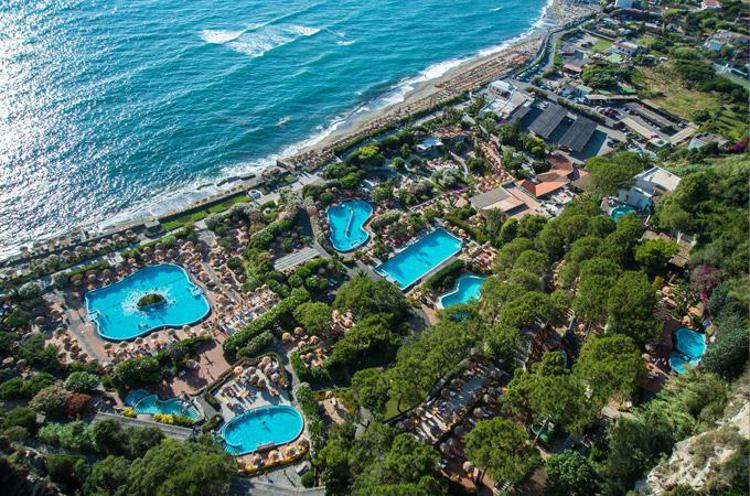 It is the largest thermal complex on the island, offering 18 pools and a high level of service. The complex is included in the list of UNESCO protected sites for the beauty of the Citara Bay, in which it is located. Here at the services of vacationers: 20 thermal pools and 3 with sea water. There is a medical center on the territory of the park, where you can get any advice; there are also cafes and restaurants.

The list of activities available to tourists on the island: windsurfing, wakeboarding, jet skiing and water biking, horse riding, basketball, handball and volleyball, golf, etc. More than a hundred dive centers are built along the coast, and the subtleties of snorkeling are taught at the Associazione Nemo center.

Also popular are boat trips, during which you can visit the most beautiful places in the region, for example: Amalfi, Positano, Sorrento, the island of Capri, etc. Shopping lovers who come here will not be disappointed either - there are enough souvenir shops, jewelry stores and boutiques on the island. Months of big discounts are December and July. 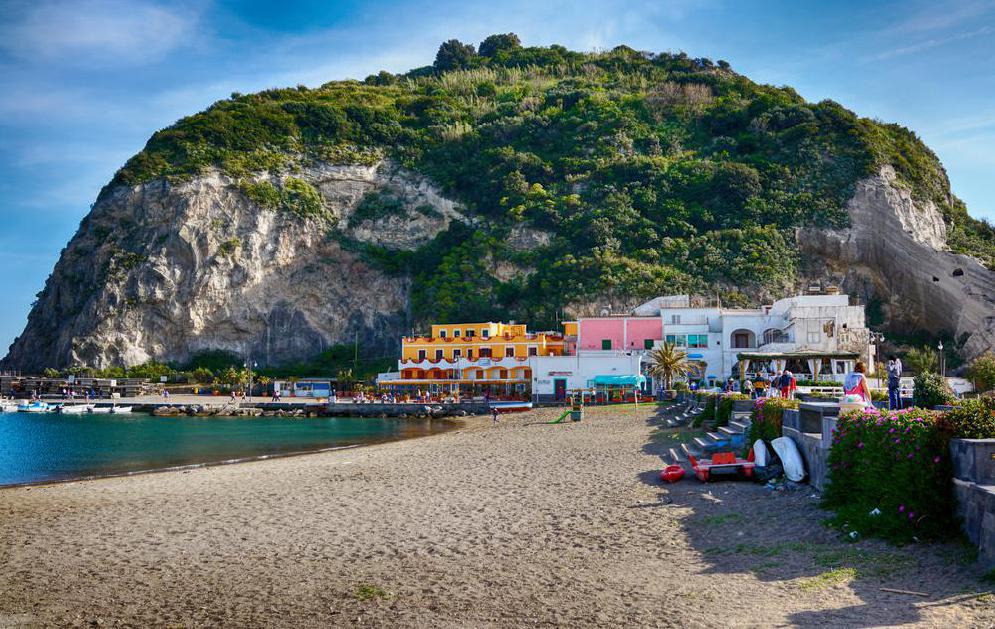 Ischia is famous for its incredibly beautiful sandy beaches. Among the most popular are:

From March to November, the weather is favorable for yachting trips, and if you want to combine them with exploring local attractions, you should choose spring or autumn. The prevailing wind directions are north and northwest. 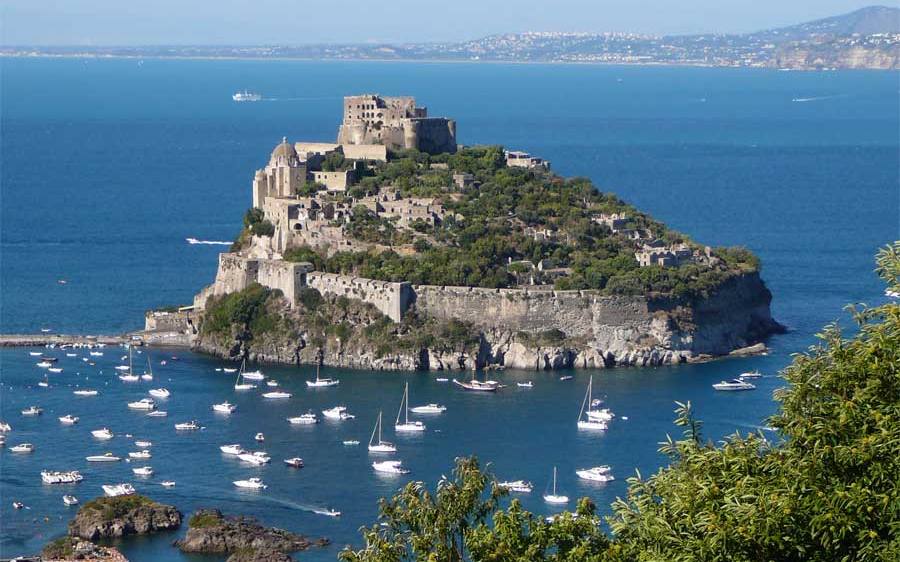 There are many yacht marinas on the island of Ischia, the most popular of which are:

Keep in mind that during the summer months, due to the influx of tourists, the marinas in the main ports are usually overcrowded.

The anchorages in the Gulf of Naples are some of the most picturesque in Italy, and the island itself is well suited for relaxation. On the Island of Eternal Youth, which has become a world-renowned thermal tourism center, you can rest your mind and body.

If you are interested in purchasing or renting a yacht, we recommend using the help of our company. Use the services of trusted professionals and organize your dream trip with 2yachts!