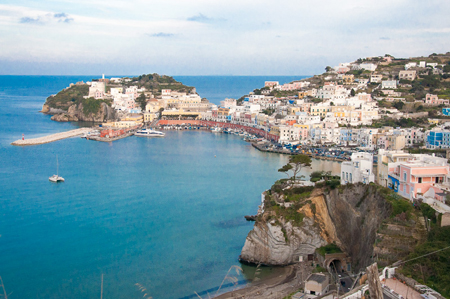 Ponza Island in Italy (the largest in the Pontine Islands archipelago) is located in the Tyrrhenian Sea 102 km southeast of Rome and has a length of just under 9 km. Ponza, like all the islands of the archipelago, is of volcanic origin and has a rich history. During the modern period, artifacts of the Neolithic era were discovered on the Pontine Islands, and the first written mention of them dates back to 338 BC. It is known that in antiquity the islands of Ponza and Ventotene were used by the Romans for fish farming. In addition, the remains of ancient port structures have been preserved on them.

Today, the Pontine Islands are very popular among tourists due to their beautiful beaches, as well as great opportunities for diving and fishing. Renting a yacht in Italy - is the best way to fully enjoy the beauty of the “hairpin” (as the people often call the island of Ponza) and the nearby islands.

Of the 6 islands in the archipelago, only Ponza (in ancient times called Tyrrhenia) and Ventotene have a permanent population, and the rest are mainly visited by tourists. On the coast of the island of Ponza there are many beautiful beaches, and its main attraction is the extensive network of tunnels, canals and pools Grotta di Pilato (it is believed that the Romans used it to breed fish here). The island is dominated by a mountainous landscape, there are caves and numerous sights from the Middle Ages.

Palmarola is a small island 7 km west of Ponza, on its territory the pristine beauty of Mediterranean nature has been preserved. The island got its name due to the abundance of dwarf palms growing here. Today Palmarola is a nature reserve and the abundance of greenery attracts tourists traveling by yacht here. The island is distinguished by the presence of many quaint cliffs and grottoes along the coast. In the summer, the inhabitants of Ponza move here for fishing - they settle in a few dwellings carved into the rocks. 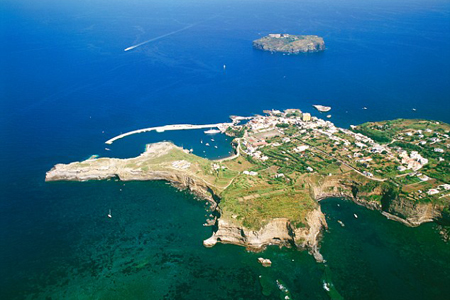 39 km east of Ponza, there is a small but very green island Ventotene. Many ancient Greek myths and legends are associated with this island. The main attraction of Ventotene is the ruins of an ancient port founded by the Romans. There are also beaches with the purest sand, caves, and reefs. Despite the fact that the territory of the island is a nature reserve, tourists are allowed to rest on some beaches. In addition, this is a favorite place among divers, here you can admire the richest underwater world of coral reefs. In addition, divers dive to study the Santa Lucia ship that sank in the 40s of the last century.

Not far from Ventotene is the tiny island of Santo Stefano, on which an abandoned prison built at the end of the 18th century appears to the attention of tourists. The ring-shaped building is the material embodiment of a dystopia, when one overseer could see all the prisoners.

The islands of Santo Stefano, Gavi and Zanonne are included in the Circeo National Park. The compact island of Zannone, with well-preserved lush Mediterranean vegetation, is a resting place for thousands of birds along the way. On Zanonna you can watch rare white-tailed eagles, graceful flamingos and cormorants - the island is home to hundreds of rare bird species. And on Gavi, located just 120 meters from the northeastern tip of the island of Ponza, inhabited by protected lizards, found only here.

Attractions of the island of Ponza 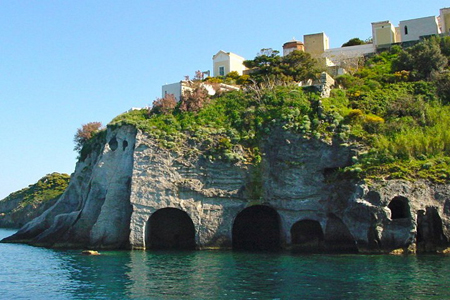 Ponza Island is one of the first in Italy in terms of the number of bays and bays. Therefore, it enjoys a well-deserved popularity among tourists from Italy and Europe. All villages and towns here live on tourism, and tourists are attracted here mainly by well-equipped beaches.

The personal property of the procurator of Judea, Pontius Pilate, Ponza has interesting historical sights. Among them: ancient aqueducts, cisterns and ponds, the ruins of the Roman villa Guilia and the necropolis. Natural sights of Ponza are no less famous, for example, the Faraglioni rocks, the exciting Fantastic castle and the fabulous grotto of the Maga Circe, where, according to the myth, the legendary sorceress Circe lived, with the help of a magic drink turned Odysseus's companions into pigs.

Long been a favorite vacation spot for wealthy Romans, Ponza still attracts vacationers to this day.

Among the main attractions of the island:

In the past, it was also possible to visit the very beautiful Chiaia Di Luna beach in the southwest of the island, closed after a series of accidents. There are good restaurants on the island and after a delicious lunch you can go snorkelling. And climbing to the top of Monte Guardia, you can enjoy a panoramic view of the island.

If you want to learn the secrets of old caves, get acquainted with the life of fishermen and taste fresh seafood - a trip to Ponza will be an excellent solution for traveling on a yacht. 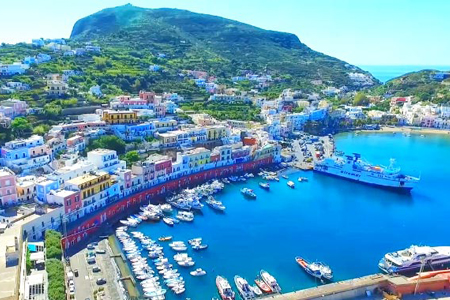 Ponza harbor can accommodate up to 200 yachts up to 25 meters in length. Water and electricity are available on the pontoons of Ponza Marina. We recommend that you reserve your yacht berth in advance, as the pontoons are often crowded with yachts throughout the season.

There are only two popular anchorages on Palmarola: in the south of the island and in the northern part of the west coast, in the bay of Cala Del Porto. In the second case, there is infrastructure on the coast (the only hotel on the island, as well as a bar and a restaurant). Ventotene is home to the Roman-founded old harbor of Porto Vecchio, which accepts boats up to 15 meters long. There is also a mooring mooring area for about 10 yachts.

If you are interested in buying or renting yachts, do not rush to choose a boat yourself, because this can take a lot of time with an unknown result. You can choose a yacht and calculate the cost of organizing your vacation by contacting the specialists of 2yachts. We will provide competent information and legal support at all stages of preparation and conclusion of the transaction.