2,827 yachts for rent in Tarragona

In Tarragona, you can go for walks along the quiet streets or spend time with a glass of sangria in one of the local restaurants. City beaches are clean and equipped with everything you need to relax. All of them have been awarded the Blue Flag award for their cleanliness and environmental friendliness, next to almost all there are equipped car parks and establishments where you can have a hearty lunch. The beaches are gently sloping and are well suited for relaxing with the youngest tourists.

You can rent a yacht in Tarragona in order to spend an unforgettable time: visit memorable events, look at the city sights, taste the best Catalan and Mediterranean cuisine and sunbathe on the beach. We offer a wide range of options for yacht charter in Tarragona for every taste and price!

Tarragona is a resort in the autonomous community of Catalonia, a large sea city 100 km from Barcelona and 550 km from the capital, Madrid, on the Costa Dorada. The city stretches along the coastline for 15 km and it is considered the heart of the Costa Daurada - the Golden Coast of Spain.

The 2yachts team is at your service in organizing your Mediterranean cruise. To order a yacht charter in Tarragona, enter the search criteria in the form on the website - the system will select for you the most suitable options based on your requirements. Use the yacht charter service in Tarragona to find the perfect boat and enjoy the sea.

An ancient settlement on the site of modern Tarragona arose in the 5th century BC, when the Iberians settled here and then it was called "Cesse". Later the city was captured by the Romans and a fortress was built here, which gradually grew. During the Roman Empire, many valuable monuments were built in Tarragona, then included in the UNESCO list of cultural heritage.

What is worth visiting in Tarragona?

The city is worth a visit to the medieval center with the remains of the Roman wall, the cathedral and two main streets - Old and New Rambla. The most picturesque place of Tarragona is considered by locals to be the “ Mediterranean Balcony " - a rocky terrace with a picturesque view of the city and Tarragona Bay.

Of course, you should see the National Archaeological Museum (the oldest in Catalonia) of the 19th century and the necropolis, the Roman circus of the 1st century AD. and the tower of the Roman Pretoria, as well as the Museum of Modern Art, opened in 1976, the Roman Amphitheater of 1-2 centuries AD, look into the Jewish Quarter and Piazza Paloli.

In Tarragona, you can take walks in the quiet streets or spend a good time with a glass of sangria in one of the local restaurants. City beaches are clean and equipped with everything necessary for relaxation. All of them have been awarded the Blue Flag award for cleanliness and environmental friendliness; near almost all of them there are equipped parking lots and establishments where you can have a hearty lunch. The beaches are gentle and well suited for relaxing with the smallest tourists.

The beach of Cala de La Roca Plana is small in size and designed for nudists, the beach of Llarga is long, with oak grove adjacent to the shore and equipped with everything necessary for relaxation (showers, changing cabins, toilets, etc.), it is traditionally used for sports and recreational activities. There is a yacht club in Ljarga. The very small beach of Cala Romana (only 50 * 60 m) is equipped with showers and toilet cabins and is very popular among the townspeople. Within the city is the beach of Arrabassad, also equipped with everything necessary for tourists to relax. In the protected natural area is the beach of Cala Fonda where you can look at the magnificent pine forests, and diving enthusiasts can admire the thickets of algae. Savinosa beach is small in size and equipped for people with disabilities. Nudists rest here. The relatively large Tamarit beach, where you can rent diving equipment, has a lot of surfers and yachtsmen resting here.

Tarragona is known for its holidays - the city hosts many festivals and competitions. An annual May festival is held here with master classes in cooking traditional dishes for the area, April St. George's Day and Corpus Christi with a traditional parade, as well as other events. If you can’t get to the festive event, you can have fun in one of the nightclubs in the Upper District of the city.

The climate in Tarragona is Mediterranean, without sharp temperature jumps and with a predominance of calm weather. In summer, cool breezes blow from the sea, reducing the effect of heat on vacationers. Thanks to the good conditions, Tarragona is very suitable for all types of outdoor activities. The beach season here lasts from May to October, the water temperature at this time is in the range + 21-25 degrees. Lovers of diving, surfing, beach holidays and yachting come here in spring, summer and autumn. The waters of the Balearic Sea is just a paradise for divers, because in the vicinity of the resort there are several wrecks and aircraft , and also has its own underwater park, managed by the Association of the Society of Underwater Research of Tarragona.

Shopping enthusiasts can also spend time to good use - there are several markets in Tarragona, and the Central Market operates in the Lower City. In the city you will find many pedestrian streets, walking along which you can shop at numerous shops and souvenir shops.

Local cuisine adheres to Catalan traditions, and seafood is very popular. So, often cook "blue fish", or Peix Blau de Tarragona, rice cooked with seafood, as well as fried fish. In Tarragona you can taste the best Spanish wines . The greatest concentration of cafes and restaurants is observed in the area of the main street - Rambla Nova, but you will have to go off the trampled hiking trails to search for truly authentic establishments.

It should be noted that Tarragona has a well-developed network of hotels, hostels and apartments, so you are sure to pick something to your taste and afford.

You can rent a yacht in Tarragona in order to spend unforgettable time - visit memorable events, see the city sights, try the best dishes of Catalan and Mediterranean cuisine and sunbathe on the beach. We offer a large selection of yacht charter options in Tarragona for every taste - choose a boat to organize your dream trip! 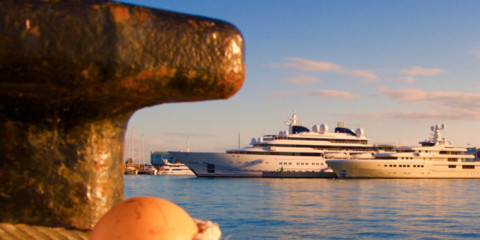